Software Freedom Day is over for another year and our event at Allsaints in Hereford proved to be a great day. We are now practised at setting up the space and the earlybird HLUG members who arrived first to arrange tables and chairs and ensure cables were safely tucked away were fortified by the excellent coffee served in the Allsaints Cafe. By 10am everything was ready and we were open for business.

Visitors were as varied as we have come to expect with HLUG members dropping in to say hello, linux users calling in for help and information alongside families, cafe customers and people who wanted to find out more about Open Source.

Our Open Source Town Crier advertised the event around the city centre bringing in the general public and our facepainter – thankyou Bella – attracted in a younger audience who had an artistic makeover with a choice of designs including the SFD sun logo, Tux the penguin and the Raspberry Pi while their parents got a chance to chat with our volunteers.

Many thanks also go to both our speakers who took the time to be with us on the day and even helped us set up and pack down the event. 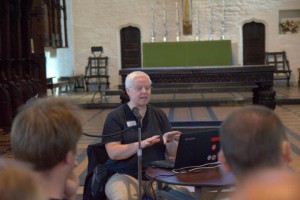 Paula Graham from Fossbox who spoke on setting up a media centre using XMBC
And Sean Tohill who lectures at the University of Westminster and gave an extended talk on Computer Security
We were kindly loaned a projector this year and using a whiteboard for a screen propped up against the pulpit – well it is a church – our Speakers were able to make their presentations – an unusual set-up but it worked well.

Thanks to all our volunteers who made the day happen and helped organise and run the event – it won’t be long before SFD 2013 – hope to see you there.

All pictures were taken by Caroline Beaumont