Before any review;
A huge thank you to all the people who have put so much thought and effort into the birth of Plasma 5

As a Chakra user, ( the KDE Distro ) I upgraded to Plasma 5 over 3 months ago, the upgrade was a major one, needing to be done by command line, rather than by our package manager.
As I use Chakra as my day to day Distro, my system was rather harder to upgrade than most. Many thanks to Julian whose advice put me back on track after I had ‘bricked’ it. ( Using the command line to successfully improve things is a rather new and novel experience to this user!! )

Then, as with everything new, a few problems occured.
By design multiple independent windows ( the spinning cube ) has gone, I only ever used two sides, annoying but not enough to put me off,
Not by design were the stability problems, crashes were normal, the whole system slowly grinding to a halt all to common, regular KDE apps like Qupzilla, would not load and then when an upgrade got it working again Rekonq stopped loading.
It must have driven the developers mad.
But as the weeks have passed the problems are being beaten,

But the WOW is still there, in the coming months it will be replacing KDE4 in mainstream Distros, and it will be mature enough to rely on, only if you must have the spinning cube decline the chance to upgrade.

Who uses the bash calculator ie    |bc for simple calculations.
I find that it is so much easier than using the gui calculator and at least I can see if I have imputed the correct figures.

OSSEC  (Open Source SECurity) is an host based intrusion detection system. Its primary function is to monitor Linux systems (files, configurations, rootkits, process monitoring) and alert to any changes. OSSEC is derived from TrendMicro, and the software can be found on enterprise systems monitoring critical hosts such as web servers, database backends etc.

More information can be found at OSSEC 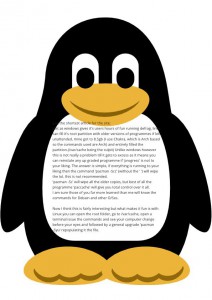 Just the shortest article for the site:
Just as windows gives it’s users hours of fun running defrag, linux can fill it’s root partition with older versions of programmes if left unattended, mine got to 8.5gb (I use Chakra, which is Arch based so the commands used are Arch) and entirely filled the partition.(/var/cache being the culpit) Unlike windows however this is not really a problem till it gets to excess as it means you can reinstate any up graded programme if ‘progress’ is not to your liking. The answer is simple, if everything is running to your liking then the command ‘pacman -Scc’ (without the ‘ ‘) will wipe the lot. this is not recommended.
‘pacman -Sc’ will wipe all the older copies, but best of all the programme ‘paccache’ will give you total control over it all.
I am sure those of you far more learned than me will know the commands for Debain and other O/Ses.

Now I think this is fairly interesting but what makes it fun is with Linux you can open the root folder, go to /var/cache, open a terminal issue the commands and see your computer change before your eyes and followed by a general upgrade ‘pacman -Syu’ repopulating  the file. 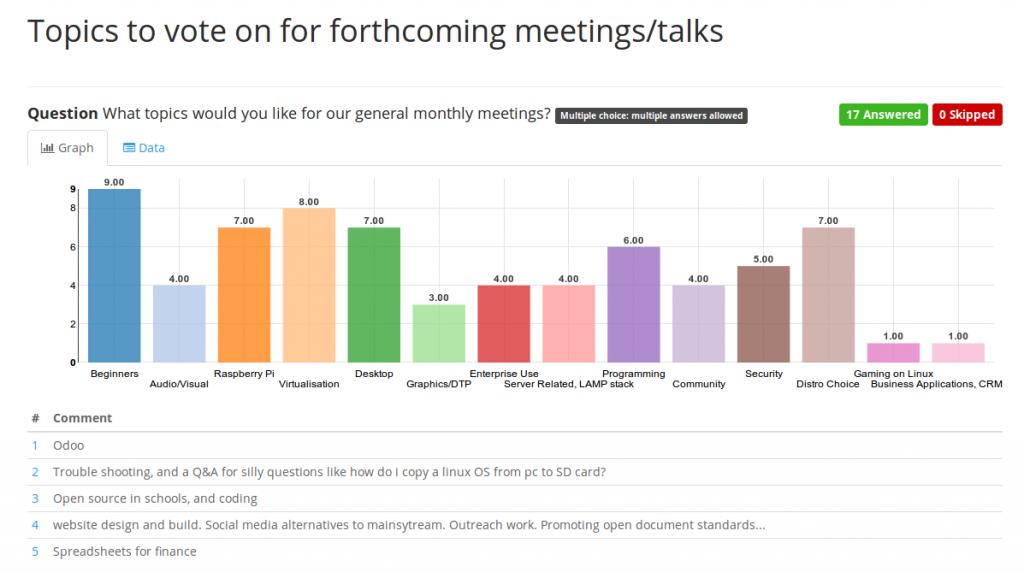 It’s taken a while but I’ve collated the results of our survey relating to topics that our members would like to see at our meetings.

​You will see that there is quite an interest in Beginners topics, choice of Distro, interest in Virtualisation, Desktop and Raspberry Pi, and Programming. Topics such as Gaming on Linux, Business applications, such as CRM/ERP and Graphics faired less well. There were a few extra topics requested which you can also see listed, such as a Troubleshooting session (sounds a good one), outreach and spreadsheets for finance.

As discussed at the last LUG Meeting we plan the first meeting based around these topics in June 24th, 4th Wednesday of the month as usual, probably to allow time to get organised. What seemed like a good plan at the meeting is to have a Beginners session that also includes Distro choice, ie why I should choose Ubuntu over Debian, Fedora or Arch for example.

In the end we had 17 responses altogether not too bad, although people were allowed to vote for as many topics as they wanted which seemed like the fairest method to use.

I will setup a Pirate pad (or equivalent) online pad where we can share our plans for this first meeting. There wasn’t consensus where we should hire a room and and have a full session, or just keep things simple and carry on at the Courtyard but please say your ideas on this .

We will also need people who are happy to talk about topics for Beginners, and structure the event. I’m happy to help coordinate, but it’s always best to get as many volunteers to help to reduce the load for the others.

We will also of course need to plan what other events for each month we will hold based around the interest shown above.

So please reply and let everyone know your thoughts, plans and ideas and/or if you want to help

I’ve been using Linux for a long time, since 1998 As far as I recall and seen many changes and popular distros come and go. I started with Redhat 5.2 in a boxed setup which had a whole manual to help you install it ..

After Linux Mandrake pushed boundaries in usability , installation, and becoming the Ubuntu Linux before Ubuntu ever existed. Sadly Mandrake lost its way a little and died before being resurrected as Mandriva and recently coming back more strongly as Mageio.

Instead I moved to Ubuntu on the second ever release back as Warty Warthrog, 4.10 , after always wanting an easy to use stable distro, that had the Debian base or upgrades far better than that offered by rpm based distros at the time.  I stuck with Ubuntu a long while, and stuck with Unity, but just found it wasn’t ideal for a work distro, but great for an absolute newcomers linux.

I moved to Linux Mint, which I still use at home, and like a lot apart from two things:

I’d heard about the ‘Rolling release ‘ distros such as Arch and a few other flavours but they didn’t quite fit, or in Arch’s case, very interesting , blisteringly quick, but needing quite a bit of time to get setup and dangers in instability just when you don’t want them

I instead looked for an Arch clone as I like ‘the Arch way’, but preferred a slightly different route. There are others, but I preferred a non KDE distro which ruled out a couple of options and found myself downloading and trying out Manjaro off a Linux format disc in a VM. I was impressed ! So fast even in Live mode. packages far newer than in most distros without endless ppas required.  I tried the standard Manjaro iso first with XFCE, which I hadn’t tried for a few years but found it had really come on leaps and bounds and was missing very few touches that I had with cinnaman as part of Mint. For that matter there are community build versions of Manjaro with Cinnamon so you can have your cake and it. But so far I’ve stuck with the XFCe version, which is so fast, its like adding another couple of CPU’s to your pc.

Its still early days and I hope I don’t find any breakages which has happened to others on odd occasions, but as being a non newbie I can usually fix most systems if required.

There si a new major version coming up shortly 0.90 currently in prerelease 5 , which promises a lot, but as a rolling release I have it already, with my upgraded 0.8.12 version I installed a while back.

But don’t take my word for it , give it a try yourself … nothing to lose. 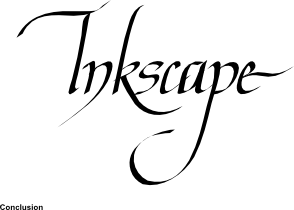 I’ve never used a CAD program, or Adobe Illustrator, always got by with Photoshop and then Gimp, but now at last I’m going to learn Inkscape for some drawings of plans for my house. Maybe then when I can handle two dimensions I’ll have another look at Blender !

Its easily downloaded from https://inkscape.org/

Help is included and works from the menus first time.

Help> Tutorials gives eight Inkscape documents which are tutorials, and which you can edit yourself (but don’t save), drag the shapes around and get a feel for how it works. Basic, Shapes, Advanced, Tracing, Calligraphy, Interpolate, Elements of Design, Tips and Tricks. I did some a few nights ago, done another two tonight. The Calligraphy one is interesting, I skimmed it, but I don’t think I’ll ever use it. 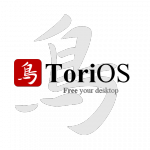 I have discovered that Lubuntu does not work on older machines, as it need a PAE CPU

I have been recommended to use ToriOS as a non-PAE capable spin-off from Ubuntu.

It looks like this project needs more workers on it !

In an email replying to my question of why their forum doesn’t work they wrote:

we have decided to put the forums off until we release the
stable version and have people who could take care of the forum. For now, we don’t need it.

PS
Other small linuxes are Damn Small Linux and Slitaz.

Our November LUG meeting will be on Wednesday night at 7.30pm, (sorry for the late notice) usual place the Courtyard in Hereford on the mezzanine floor. Hope we can get a good number at the meeting on Wednesday night.

If you have been on our list but haven’t attended a meeting yet, or you’ve been unable to attend for a while, we’d be very pleased to see you.

The meeting will start at roughly 7:30pm as usual.

1. Would be good to get some ideas on topics, and events that the group would like to pursue in the coming year.
2. Secondly, we need to discuss where we would to go for our Christmas LUG meal that usually takes the place of our December meeting. The Ponte Vecchio Italian restaurant in Hereford has been great last couple of years, should we stick with this, or go somewhere different ?

The Courtyard has free fast wifi and serves lovely coffees and food, and there is level access to all public areas of the building. You can find directions to The Courtyard, Edgar Street, Hereford, HR4 9JR here

The Courtyard has pay and display parking adjacent and free parking a short walk away.
(Free parking in adjacent streets.)

I’ll see you all there on Wednesday.

Hi Everyone
After a few problems last month, just a quick note to say our September LUG meeting will be on Wednesday night at 7.30pm, usual place the Courtyard in Hereford on the mezzanine floor. Hope we can get a good number at the meeting on Wednesday night. 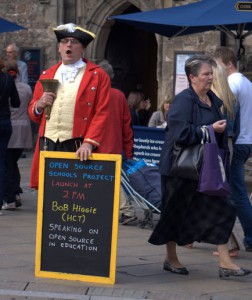 If you have been on our list but haven’t attended a meeting yet, or you’ve been unable to attend for a while, we’d be very pleased to see you. The lift appears to be working too (the last time I checked a couple of weeks back).
The meeting will start at roughly 7:30pm as usual.
Items to discuss :-
The Courtyard has free fast wifi and serves lovely coffees, and there is level access to all public areas of the building. You can find directions to The Courtyard, Edgar Street, Hereford, HR4 9JR here
http://maps.google.co.uk/maps/place?cid=8198539616210862916&q=courtyard&...
The Courtyard has pay and display parking adjacent and free parking a short walk away.
I’ll see you all there on Wednesday.